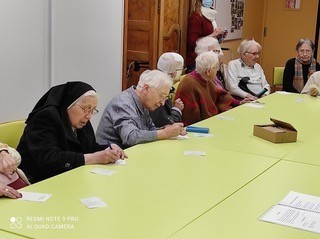 The grace of Lourdes at home 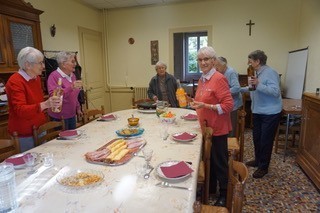 We extended our inter-community meeting by inviting the two sisters of the Holy Family of St Etienne: Sister Marie Jean and Sister Paul Marie. Our enlarged inter-community has given us the joy of getting to know each other better, each having shared their journey in... 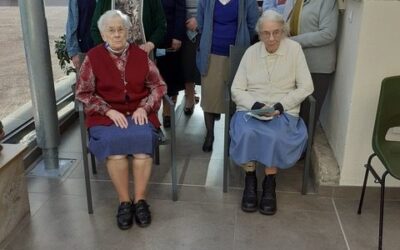 FRATELLI TUTTI … on a daily basis

I would like to share with you what I experience at Claire Maison, welcoming people who come to provide maintenance services for our house. The whole world has visited our house: from July to December 2020, I welcomed them and introduced them to the part of cleaning... 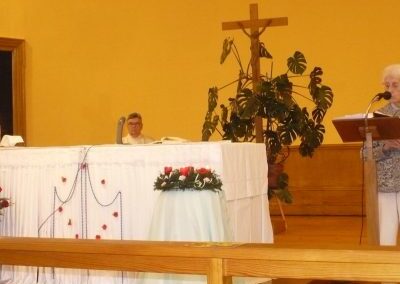 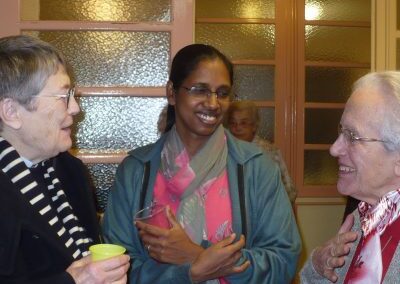 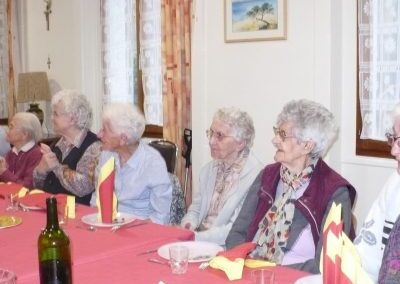 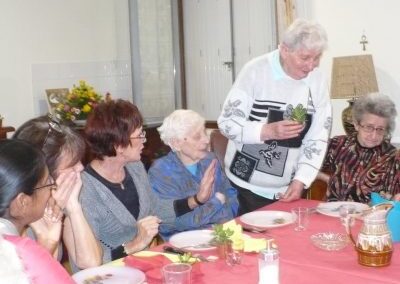 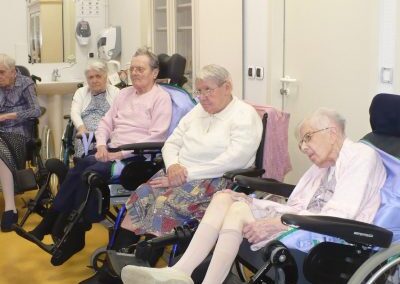 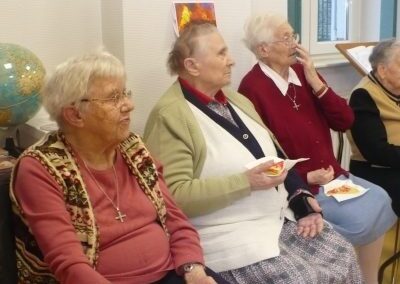 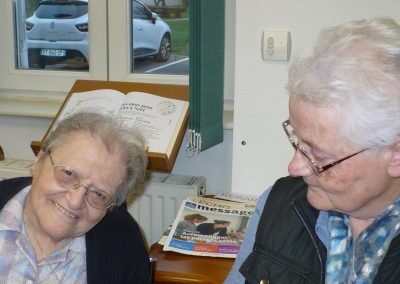 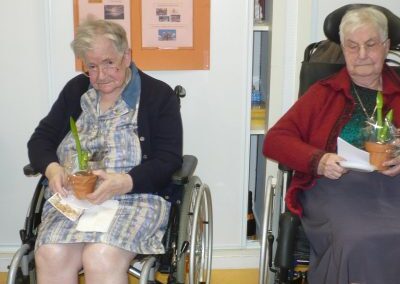 THE « PASSEURS » HAVE RETURNED !

Already in 2015, the Community of 1 rue du Lycée had been able to meet the group of Passeurs. On Friday, November 16, all the Sisters were waiting.

The meeting was to begin with the Eucharist in the Jean Pierre Médaille room, due to the inclement weather which didn’t allow us to use the large chapel.

Before Mass began, Sr. Marie Claire expressed her joy for the closer bond between the Laity and the Sisters of St. Joseph (the three communities of Bourg were present). Then Fr. MONTERRAT, our presider, introduced himself. It was a simple and prayerful celebration.

At the end of Mass, our community had the joy of being « welcoming. » Mr. ZAMPROGNIO had taken care to generously prepare a buffet. . Each Sister had contributed in preparing the place. After crossing « Siberia » (a icy hallway), we find ourselves in a warm place, quite crowded in our dining room.

If some faces were already familiar, it was not the case for everyone, but the atmosphere was not frozen neither were the languages. Everyone appreciated the toasts and drinks. 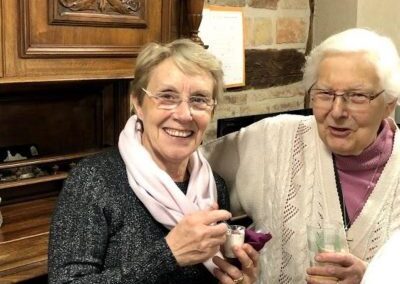 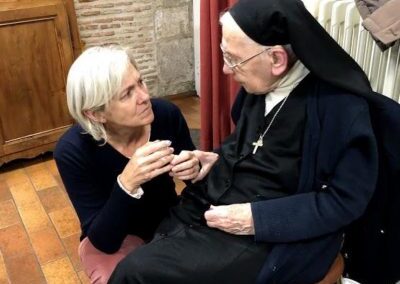 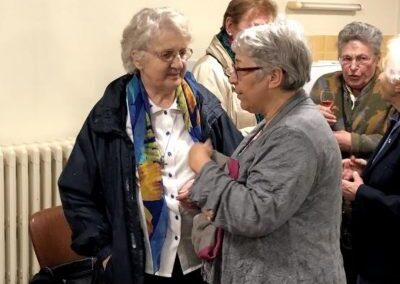 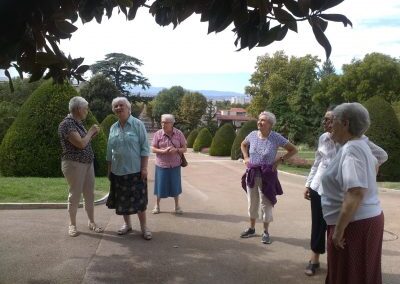 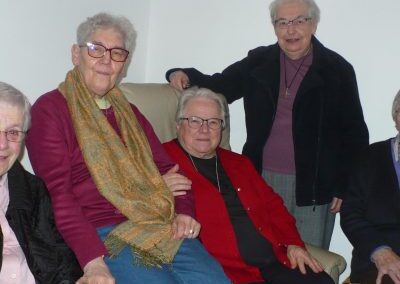 Meeting of Lyon and Pessac 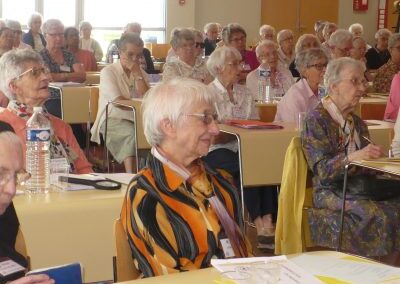 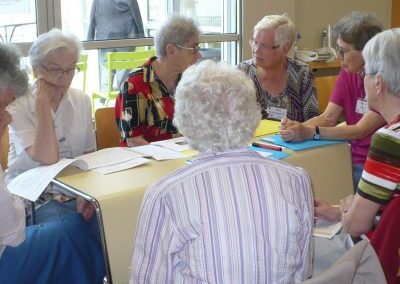 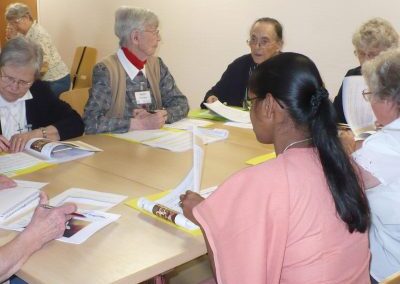 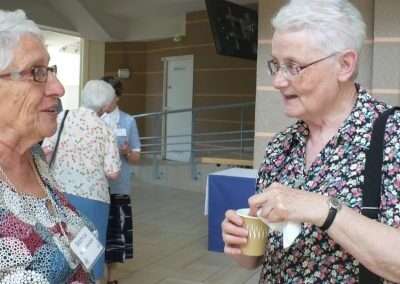 A little coffee during the break

It was on the Croix Rousse hill that Sister St Jean Fontbonne arrived on July 13th 1816 to open a novitiate in a part of the Chartreuse Convent, rue Pierre Dupont.

And it is from there that the Congregation of St Joseph of Lyon has spread.

Today this foundation place is the bearer of the rich history of our Congregation which has seen the Saint Joseph branches break off and become independent Congregations.

The Province Europe includes Sisters in France, Belgium and Switzerland.

A Council composed of a Provincial and four Assistants favors the life of the Sisters in the communities at the service of unity and the mission.

The Sisters are assembled in apostolic communities according to their age and possibilities: The Sisters are engaged in society and in the Church in different ways: For a certain number of years the Province has chosen to entrust responsibilities to the laity in our Schools as well as in our Retirement Care Homes.

The animation of such establishments is according to the “Saint Joseph Spirit” – Religious and laity working together as partners striving after” the double union of people together and with God.”

As for Education, the Sisters are actively engaged in the schools or in the Conseil de Tutelle.

La Tutelle Scolaire in the Province.

The Tutelle is a guarantee of the evangelical authenticity of the educational project and of its implementation in the schools under its pastoral responsibility.

The “Conseil de Tutelle” organises the follow up of the schools so as to promote their dynamism according to the spirituality of St Joseph.